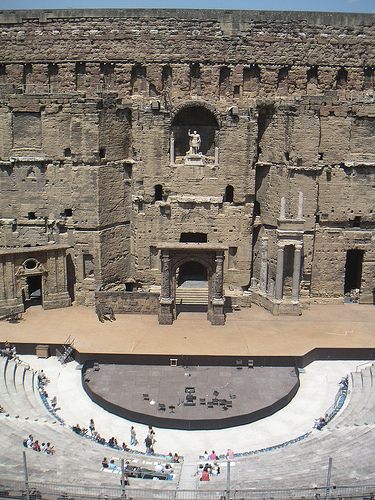 The first things that come to mind when thinking of Provence are olives, wine and lavender. These three key produces of the region have been trademark productions of the area for over 2000 years and all three of them were introduced by the Greeks and the Romans. The name Provence, derives from the Roman name “Provincia Nostra” which means “our province”. Therefore everything essentially Provençal by nature is deeply linked to its antique origins and the Greco-Roman civilization that would shape Mediterranean culture forever.

In the holiday rental industry, the term villa in itself has retained its Roman definition, meaning a luxurious country home. One of the appeals of staying in an exclusive vacation rental is the “live like a local ” experience.  If you are planning on staying in Provence why not go a step further and live like a Roman? This is our attempt at a quick guide to making your visit to Provence a truly exotic, enriching and awe inspiring experience back in time. Maybe like Jean-Jacques Rousseau visiting the Pont du Gard  in 1738 you will also say :

Why was I not born a Roman! 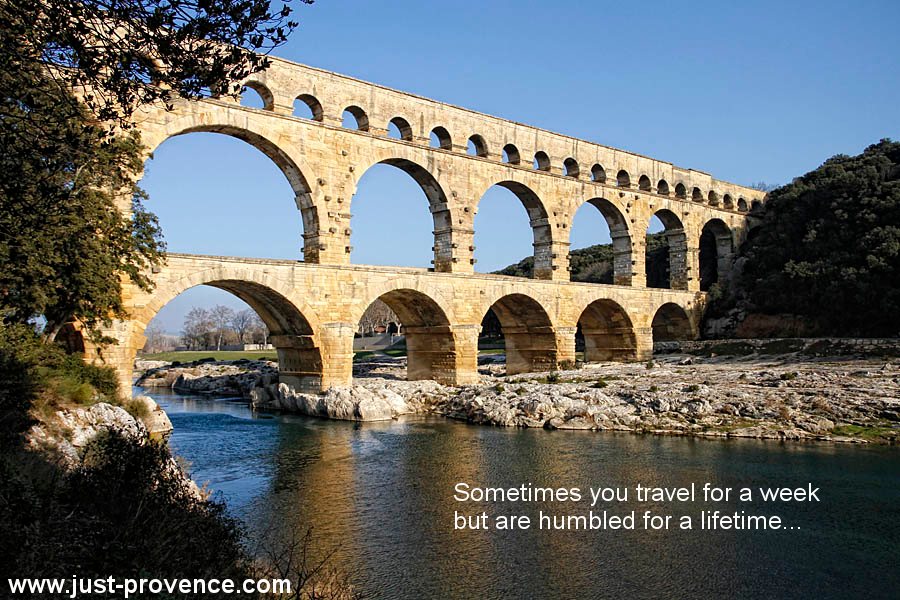 Undoubtedly the most famous Roman built monument of Southern France, the  2000 years old this UNESCO protected aqueduct has inspired generations of visitors through the centuries. It the best preserved and tallest Roman building in Europe, since 2000 it has a visitor centre and museum with activities and information for the whole family. There are amenities on sight and the proximity to Uzés makes this architectural marvel a must-see  visit to Provence.

In the summer the site of the Pont du Gard is host to music festivals and firework displays of excellent quality.

Orange boasts a superb 2000 year old Roman theatre, which features a 37m high theatre wall.  The theatre was within a century of the establishment of this Roman colony and survived through the centuries. Nowadays it has been returned to its original use and hosts operas, choir festivals and concerts. Like the Romans themselves you can visit the town centre its market and amenities, and at night enjoy a meal at the troglodyte theatre’s restaurant  before a wonderful spectacle in this architectural gem of Ancient times.

The town has museums and visitor centres the whole family can enjoy and a perfectly preserved Triumphial Arch.

Through the progressive romanisation of the local Celtic tribes of Provence, Vasio became one of  the most important towns of Roman Provence. Being a great example of successful Gallo-Roman culture it boasts large villas with rich mosaics, a well preserved theatre and 1st century Ad Roman bridge still used to this day. Remains of a Roman temple can be seen at the cathedral, one of the oldest in France. The museum of  Vaison-la-Romaine  for 2013 has prepared a 3D experience to recreate life in Roman Vasio you can view the trailer (in French) below.

The old town is also charming with its  medieval castle and winding streets.


Arelate as it was named by the Romans was inhabited by Ligurians since 800AD. It has been visited by famous figures of Rome like Julius Caesar or emperor Constantine I. Today much of Roman Arles remains and is in use like the impressive arenas for example. The ancient Mills, Arenas, museums are worth visiting and truly remarkable. The town puts on Roman themed festivals in the summer with gladiator displays, equestrian presentations  and re-enactments. You can even take gladiator classes from September to April.

Saint-Rémy-de-Provence, arguably the most sought after location in Provence, is historically an offspring of a much older settlement known as Glanum. This Gallo-Roman town is rich with exceptional historical monuments such as the Triumphal Arch and the Julii Mausoleum commonly known as “Les Antiques”. To complete your Roman experience in Glanum you can visit the Taberna Roman, a Roman tavern neighbouring the archaeological site offering Roman menus and setting.

This list could include a host of other locations from renowned Nîmes to the less known Laudun with its Caesar camp and ancient ruins, but the locations listed above are the most family friendly and immersive Ancient sites of Provence. Have you visited Gallo-Romans sites in the South of France, any we have forgotten that you think is worthy of our top 5? Do not hesitate to leave a comment.

If you have any questions or comments do not hesitate to leave a message or contact me at: [email protected].