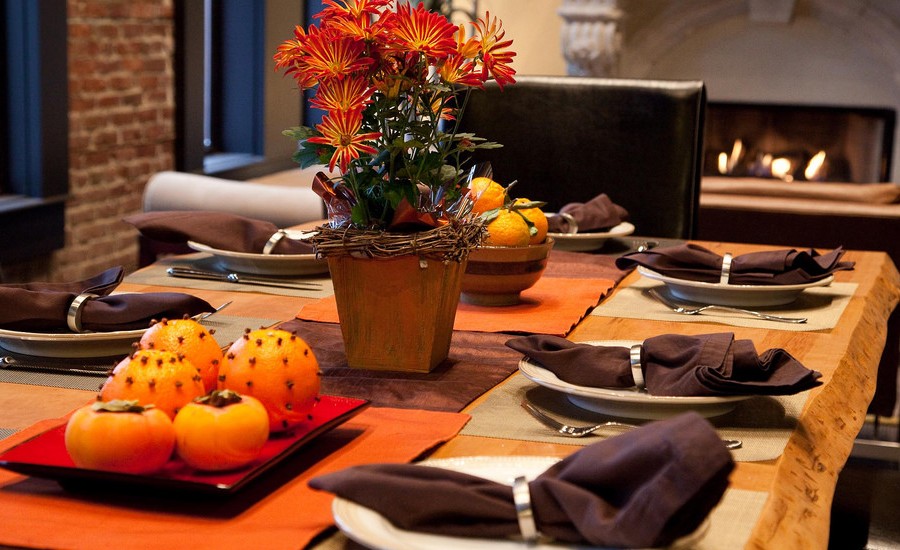 Thanksgiving is the favorite U.S. holiday of many Americans.

It was first celebrated in 1621 by Native Americans and Pilgrims in Plymouth, Massachusetts to give thanks for the harvest from the preceding year. It is a secular holiday, celebrated on the fourth Thursday of November by all Americans, each adding their special dishes depending on their state and their cultural origin. It is the busiest travel time of the year, since everything gets packed into just the Wednesday prior to the Thursday feast plus the week-end as families and friends travel to get together for the celebration.

Preparing a large Thanksgiving feast is strenuous enough for any home cook, but cooking for 35 serious foodies in an unfamiliar kitchen in a foreign country requires supersized savoir faire.

Then again, Stephanie Fray is hardly your typical home cook. As the head of Sophie + Faulkner in Paris and Conundrum in the US, she handles strategy and communications for a wide range of clients including the annual New York Culinary Experience, a two-day event sponsored by New York magazine featuring hands-on cooking classes with 30 top chefs.

Growing up in Brooklyn and Westchester County, New York, Fray came from a family “that thought nothing of driving two hours for the perfect pizza.” Today she’s a passionate cook and the kind of food lover who, if she finds herself with a few hours to kill in Paris or elsewhere in France, thinks nothing of dropping into a Michelin three-star restaurant and grabbing a last-minute table. Chefs often come out of the kitchen to see who the long-haired American walk-in is…the one enjoying the eight-course dégustation with wines, happily alone at a two-top, texting away on her phone.

A long-time Francophile, Fray keeps an apartment in Paris and pops down to Provence any chance she gets. For the last seven years, she has rented a house at holiday time and decided to host Thanksgiving for small group of friends, both French and expat. In 2015, she chose a gorgeous mas in the village of Eygalières, loaded it up with friends for the weekend, and set out to prepare a Franco/American feast for pretty much anyone who wanted to come. Even after the first bottle of Champagne was opened around 7:30 p.m., Fray was fielding phone calls and texts, telling friends, “Of course, bring anyone you want!”

The first order of business was the turkey, which Fray had ordered in Provence back in September. Since turkeys in France aren’t fattened until Christmas, Fray had to find a farmer who was willing to have two big ones ready, freshly killed and plucked in time. She picked them up a few days in advance, whacked off the heads, and popped them into their brine. On that same trip, Fray had also begun sourcing wines, visiting her favorite domaines in Provence and storing bottles with friends.

Before heading back to France in mid-November, Fray packed and shipped supplies from New York: her brine mix, her favorite knife, a hand mixer, popopver pans, disposable quart containers, foil catering pans, and other disposables hard to find in Provence.

Upon arriving in Paris, she borrowed a membership card and made a beeline for Metro, a large wholesale grocery chain. There she bought extra plates, glasses, cutlery, and staples, to be driven down to Provence with friends. She also tasted her way through a large number of small batch, mostly organic labels at Table à Côté, the wine shop owned by Bruno Verjus, who also has the restaurant Table. “This was just after the Paris attacks,” Stephanie says, “and the stores were really hurting. I wanted to do as much of my shopping there as possible.”

Once she was settled in Provence (the TGV train from Paris to Avignon takes less than three hours), Fray set out to finish her shopping, a four-day treasure hunt. From markets and shops in Avignon, Cavaillon, St. Rémy, and Arles, she plucked sausages, cheeses, chocolates, Bordier butter, fresh cream, cèpes, girolles, chanterelles, fleur de sel, estate-bottled olive oils, vinegar, eggs, vegetables, fruit, spices, golden raisins, and much more. Then it was off to the boulangeries to sample breads, while fresh herbs were cut from a friend’s garden. Cranberries were ordered four days ahead from the épicerie in the town of Eygalières. She bought six types of mushrooms, five types of apples, three different potatoes, and seven different breads, just to be sure.

“When you don’t actually live somewhere,” she explains, “you don’t know what things taste like at that time of year. I wanted to sample all the fresh ingredients first.”

“Of course, I ran into a few problems,” Duffy reports. “First, it’s impossible to find American-style pie pans with a lip; there are lots of tart pans around, but they’re too big in diameter. I meant to bring foil pans with me from New York, but with the hurricane, it all became too much! Secondly, it’s hard to find baking soda and baking powder, at least in shops around our village in the Var. But I did find self-rising flour, which worked brilliantly as it has the leavening agent added.

“Unlike most people who buy prepared pastry in supermarkets,” Duffy continues, “I like to make my own pastry for Thanksgiving pies, combining butter and lard for a flakier crust. I finally found lard at the grocery Le Clerc, but had to ask four people where it was. Obviously lard is not common in Provence!”

For many of the French guests at the table, this was their first Thanksgiving, and certain dishes—like stuffing—were completely new. “This is the first time I eat red fruit jam with turkey,” reports local sculptor Stephane Guiran. “I like it! I liked all the different accents, too, particularly the Scottish accent of David Duffy! It was a great moment: warm atmosphere, full of life, and great food. It reminded me of family Christmas dinner. And because the story of Thanksgiving was read, it was a cultural evening, too!”

Another first-timer was St. Rémy Tourist Office president Philippe Goninet. “After watching so many ‘Merci Donnant’ (i.e. Thanksgiving)  scenes in movies, it was wonderful to be part of one!” he reports. “For the French, it’s unusual to serve all the foods at once, rather than in courses, so that was new, and we loved it. I can’t wait for this year!”

With leftover supplies and new cookware safely stashed in a friend’s Provence garage—and the same mas rented again for a week this month–Fray is already deep into planning for her 2016 feast.  Key to pulling off a traditional meal in a foreign country, she says, is to start early, ship what’s feasible, use what’s at hand, and be very willing to substitute. And most of all, hang loose. “There are always little things forgotten,” she says, “like the Parmesan meant for the roasted potatoes. But what matters is friends around the table. That’s what I care about most. I’d do this every week if I could.”

Julie has suggestions for great ways to spend your Thanksgiving in France this year, click here.